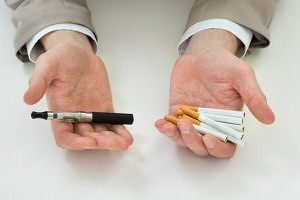 As smoking constitutes the most important cause of chronic lung diseases and preventable morbidity worldwide, smoking cessation is the single most significant intervention for the prevention of lung diseases. E-cigarettes (ECs) have proved very popular and a meteoric rise in their usage is currently being experienced. People purchase them as an aid to give up smoking, to reduce cigarette consumption, to minimise withdrawal symptoms in occupational environments that ban smoking, and in order to continue smoking with decreased health risks. Electronic cigarettes are devices whose function is to vaporize and deliver to the lungs of the user a chemical mixture typically composed of nicotine, propylene glycol and other chemicals. These products are not currently regulated or monitored (although this is about to change) so that at present the contents may vary between different e-cigarettes and may not be known to the consumer. Although the safety and impact on health of electronic cigarettes, especially after long-term use, has not been evaluated, they are generally considered to be far safer alternatives to cigarette smoke.

Electronic cigarettes do not generate polycyclic aromatic hydrocarbons, a potent class of carcinogenic chemicals generated during the combustion of tobacco and making important contribution to the cigarette-induced cancer. However, carcinogenic tobacco-specific nitrosamines have been encountered in e-cigarettes being detected in some nicotine cartridges as contaminants, albeit at very low concentrations in comparison with tobacco smoke. Tobacco-specific nitrosamines are very potent carcinogens and play a major role in the aetiology of smoking-induced lung and oesophageal tumorigenesis. They are classified as human carcinogens and form a number of DNA adducts by methylation and pyridyloxobutylation. An additional potential source of exposure to tobacco-derived nitrosocompounds is endogenous nitrosation of nicotine or of its demethylated metabolite nornicotine generating 4-(N-methyl-N-nitrosamino-1-(3-pyridyl)-1-butanone (NNK) and N´-nitrosonornicotine respectively, both being carcinogenic compounds believed to be major contributors to tobacco-induced cancer. In particular NNK is considered to be a very potent pulmonary carcinogen, whereas NNN has been linked to oesophageal tumorigenesis; a dose-dependent association has been reported between urinary total NNN and oesophageal cancer risk in smokers. In subsequent studies in smokers that ceased smoking and started using orally taken nicotine-replacement products, such as lozenges and gums, NNK was detected in the urine at levels considerably higher than baseline levels. Furthermore, studies in humans revealed that in smokers that ceased smoking and used nicotine transdermal patches for 6 months, NNN was formed endogenously albeit to a low extent. Although the level of nitrosamine exposure in electronic cigarettes is very low, they cannot be considered as completely safe since it is widely accepted that there is no threshold for chemically-induced carcinogenesis.

Changes in gene expression as a result of epigenetic phenomena, such as DNA methylation, have been implicated in the underlying mechanisms of addiction and withdrawal as well as some of the toxicological effects of smoking. Whereas DNA methylation during tobacco exposure has been extensively studied, no information is currently available on the effects of e-cigarette vapour on epigenetic phenomena. Moreover changes in stress hormones are known to be associated with smoking craving, withdrawal symptoms and relapse; however, the consequence of transition from tobacco smoke to e-cigarette vapour on stress hormones has not been addressed.

Consequently, as the safety of prolonged use of e-cigarettes has not been investigated in detail so far and given the meteoric rise of their use, it is imperative to ascertain the toxicological consequences as a result of transitioning from tobacco smoking to using vapour nicotine intake through e-cigarettes.

The main objective of the pilot study is to monitor tobacco-specific nitrosamines, DNA adducts, stress hormones, DNA methylation and mood during the transition from cigarette smoking to electronic cigarette use though a prospective observational study. A parallel in vivo study will further assess any potential toxicological effects of chronic exposure to e-cigarette vapour.

Where it is going to take place

The pilot study will take place in the UK at the Clinical Research Facility at St George’s University of London (Cranmer Terrace, London, SW17 0RE).

What participants are going to do during the pilot? For how long?

Heavy smokers (>10 cigarettes per day) for at least 6 months) who are willing to give up smoking and switch to nicotine containing e-cigarettes will be recruited.

Heavy smokers who are transitioning from tobacco cigarettes to e-cigarette use, will be monitored through questionnaires, and urine, saliva, buccal swab and blood samples will be collected for analysis during each visit to the Clinical Research Facility. Eligible subjects will attend the Clinical Research Facility 6 times within a period of 4-5 weeks. Following the initial screening visit, baseline measurements through questionnaires and sample collection will be obtained, and smokers will be asked to completely abstain from tobacco smoking and instead use e-cigarettes of their choice. Subjects will subsequently visit the Clinical Research Facility for a further 4 times in within a period of 4 weeks, while they continue using e-cigarettes, and will be monitored through questionnaires and by monitoring biomarkers in urine, saliva, buccal swab and blood sample collection. The subjects will be contacted by phone twice following the end of the study. Participants will be reimbursed (£300) for their time and travel expenses and, moreover, everybody will get a blood pressure check.

Benefits for the participants

It is envisaged that the participants will benefit from taking part of this study as it is anticipated that this intervention will enable smokers to reduce smoking tobacco cigarettes, remain abstinent from cigarettes and may even prevent relapse, all of which inevitably will lead to better quality of life in the long run (lower risk to diseases associated to smoking).

Do you want to be part of our e-cigarette community? If you are interested in participating in this study please contact, smokefreebrain@sgul.ac.uk